Membership and the purpose of the association

The Tokyo Tech Alumni Association is the only alumni association that covers all departments and majors of Tokyo Tech.
It consists of about 80,000 graduates, faculty and staff, including those from the predecessor school.
Current students also participate in activities as student members.

Tokyo Tech is a national science and engineering university with a history of more than 130 years since its foundation, and its research fields are diverse and consist of 6 schools, 19 majors, 1 professional degree course, and research institutes and centers. Graduates are quite active in many fields.

Under the supervision of the president, the association discusses and decides necessary matters at the board of management, branch managers' meetings, various subcommittees, etc. in addition to the general meeting of members, and ensures smooth operation. In addition, there are 42 branches nationwide and 8 local Kuramae associations overseas to promote friendship and businesses for public interest. 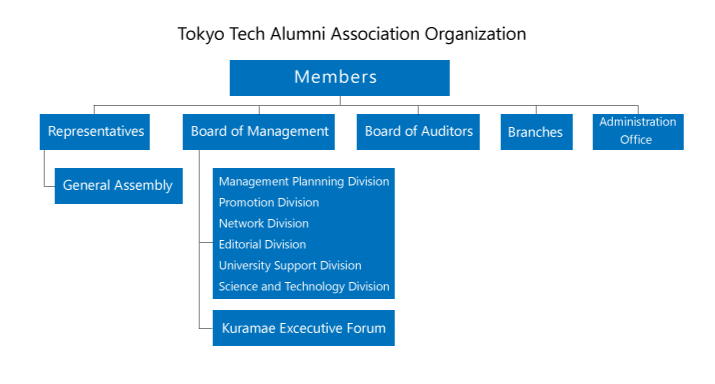 Message from the president

At the board meeting held on June 11th 2020, I was appointed as the president after receiving the recommendations of the directors. Currently, emergency measures such as refraining from going out are being taken in the fight against the new coronavirus, so this year's annual general meeting was a written deliberation, and the board of directors after the general meeting was also held by a web conference system. We would like to express our sincere gratitude to all the members for their efforts.

Since its founding in 1906, the Tokyo Tech Alumni Association has left a brilliant history thanks to the efforts of its former president, Ishida. As a flag for promoting science and technology in Japan, we have produced great human resources in the Japanese industry. While inheriting the tradition of the Tokyo Tech Alumni Association, I hope that I can contribute to the further development to the best of my ability. We would like to ask for your continued support and cooperation as before.

The management policy of this association is the same as before, but we would like to make further efforts in the following points in the future. The first is to strengthen cooperation with Tokyo Tech, which will celebrate its 140th anniversary in 2021 next year, has been promoting education, research, and governance reforms with the aim of becoming a "Top 10 research university in the world" under the strong leadership of former President Mishima and current President Masu. As a result, it was selected as a designated national university in 2018. We would like to support such reforms of the university from various aspects and promote closer cooperation between the graduates and the university.

The second is internationalization. Many researchers and international students from overseas are studying at Tokyo Tech which aims to become the top 10 in the world. Also, the number of Japanese graduates who are active overseas is increasing. In order to collaborate with these overseas graduates, we have built a network with 13 overseas chapters of Tokyo Tech Alumni Associations. In the future, we would like to further strengthen this network and support collaboration among overseas universities and Tokyo Tech.

The third is the utilization of IT. Tokyo Tech has responded appropriately to this new coronavirus problem from an early stage by providing online classes and support for students in need. I think this should be highly appreciated, and we will continue to support it. As it is called "new normal," I think that business and lifestyle will change thereafter. We would like to make further use of the Internet to strengthen the network with our members. In particular, I would like to provide useful information to each branch in Japan and everyone overseas.

Fourth is the interaction with society. We have contributed to the promotion of science and technology through various frameworks such as the Kuramae Science Program Fushigi Fushigi (KuraRika), Public Lectures, Tokyo Tech Association of Professional Engineers, and Kuramae Venture Consulting Office. We have also contributed to society by promoting industry-academia collaboration with graduates who are active in the business world and academies. We will continue these activities in the future.

We strongly believe that technological progress and innovation will contribute to the stabilization and progress of society through economic growth and rectification of disparities. The Tokyo Tech Alumni Association will continue to contribute to society together with Tokyo Tech. Lastly, I wish all of you the best of good health and success, and would like to ask for the support and cooperation of the Kuramae Tokyo Tech Alumni Association.

The Articles of the Tokyo Tech Alumni Association

The Articles of the Tokyo Tech Alumni Association (in Japanese)
About

The Early Summer 2022 Issue has been published. Mr. Katsumoto, who is CTO of Sony Group Corporation appears in the leading article. He has enjoyed taking on challenging tasks in a wide range of areas.

What’s up on SNS